Which Is the Best Platform for App Development In 2021? Angular V/s. React! 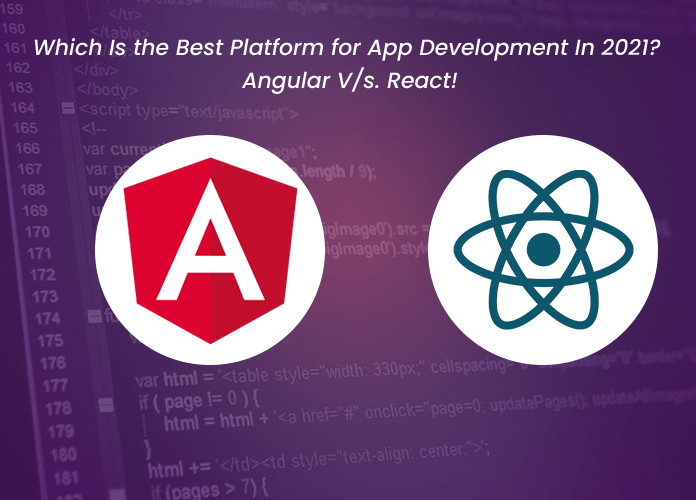 In the preceding years, mobile app development has turned out a booming industry. At present, 2.3 million mobile app developers are catering to the industry world over. Thus, mobile applications have taken the world by storm. In the ancient days, ‘ browsers were mainly used for location and information. However, today all you need to do is download apps and start functioning. With the arrival of mobile apps, businesses have scaled up their operations. It has become easy to reach out to customers.

Through mobile app development, the applications are pre-installed on phones at the time of manufacturing platforms or forwarded on web applications employing server-side or client-side processing. It is an application-like happening within a web browser. Thus, these are software applications that operate on mobile unique computing resources and hardware.

The mobile app development business touched $600 billion in 2020. The android OS assists the development of cutting-edge mobile apps with the best features. A single app model permits apps to multiple users across a range of mobile devices. The following has to be kept in mind while developing an app:

Mobile app development company caters to the specific needs of the client using iOS windows and android platforms. The businesses, whether start-ups or large corporations, benefit from the mobile app through mobile vision. The team of the company has expertise and experience in the respective fields.

The App development company plays an important role in evolving a user-friendly app. This will lead to business success. The app you should make sure is secure, scalable, and healthy in its applications. As a customer, ensure that the company has the following:

As the mobile app procedure and acceptance multiplies, the number of app downloads grow globally. In the last ten years, the mobile industry’s rampant growth is sustained by the increased market invasion of smartphones and easy access to a faster internet connection.

Based on research, 205 billion apps are downloaded, which is a 15% enhancement over last year. By 2022 there is a prediction of a 25% increase in app download. In another study, smartphone users devote 90% of their time to mobile apps. 85% of end-users prefer native mobile apps rather than mobile websites. Thus, mobile apps are imperative for business.

Most businesses in present times launch their applications. The app’s favorable outcome depends on the number of downloads using the Apple Store or Google Play Store. It becomes necessary that design and content should be attention-catching for the right target users. Moreover, there will be an upsurge to be attained in 2020 and even after that. The competition will be tough because there will be many apps competing in one category.

The Two Advanced Technological Platforms in Demand for Mobile App Development Are:

A survey in 2020 for most popular framework React and Angular was placed at second and third positions. If we ponder over last year’s position, Angular was leading.

It was in 2013 that Facebook released React. React came about when Facebook began to get more traffic for ads, but it hassles in coding and maintenance. Still, it was used by developers to evolve high traffic websites. The latest version of the platform came about in 2019. This resolved the high traffic problem. The landscape of business is changed through prominent cross-platform app dev tools. React help businesses to share 80% of a specific codebase across the platform. App complexity is an important point to be considered.

React is an open-source JavaScript library that constructs an attractive appearance user interface. The drive is for a simple user experience. When it comes to consolidated frameworks, most app development companies use React. It is the trendiest tool for cross-platform mobile apps. The prominent features of reacting are:

Google developed it in 2010 for applications. Angular is a typescript-based JavaScript framework. It was in 2016 that Google brought in Angular 2. Angular JS is, however, updated. Google will not support Angular JS after 2021. Angular ten made its presence felt in 2020. This framework is designed for making productive and advanced single-page apps.

Angular is an open-source front-end development framework. It has compatibility with every size of code editor.HTML is the template language. It supports the MVC programming structure. Prominent features of the framework include:

In short, both platforms are fascinating as well as useful from their outlook. Both frameworks are updated at regular intervals. The improvements show better useability trends. The choice of the framework depends on the requirements and objectives and the complexity of the app. The developers are the best judge in the use of the framework.